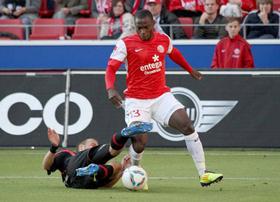 Bayern Munich's Poland captain Robert Lewandowski was on target against Hannover 96 in the 31st round of matches in the German Bundesliga.

In doing so, the prolific striker became the highest non-German goalscorer of all time in the top flight for one club with 105 goals, breaking the record he jointly held with Claudio Pizzaro.

Another inactive player Victor Agali famous for his spell with Hansa Rostock is second with 32 goals and he played 143 games, one less than Akpoborie.

Current Nigeria international Anthony Ujah is in third place with 23 goals, out of which 11 goals were scored for Werder Bremen, and with an impressive 306 minutes per goal ratio

Fourth place goes to Eintracht Frankfurt legend Austin Okocha who tallied 18 goals and provided 13 assists in 90 matches, he can be regarded as Nigeria's top scoring midfielder in the history of the Bundesliga.

Chinedu Obasi, Obafemi Martins and Solomon Okoronkwo are the other active players in the top ten Nigerian scorers in the Bundesliga.