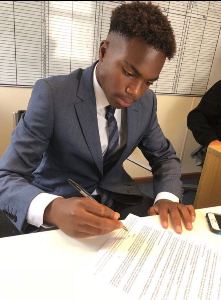 English Premier League side Crystal Palace have completed the signing of highly-rated Nigerian teenager Jesse Nwabueze, who has been likened to former Super Eagles star Austin Jay Jay Okocha, allnigeriasoccer.com can exclusively report.
The 14-year-old has put pen to paper on a two-year deal with the Eagles and will play for their youth teams in the upcoming season.
He was on the books of League of Ireland Premier Division outfit Dundalk FC before moving to England.
Colchester United, Chelsea as well as Arsenal were interested in Nwabueze's services before he agreed terms with Crystal Palace.
Chelsea picked an interest in him after he starred in an in-house match for the club at Cobham Training Center and was asked to come back for further assessment.
Nwabueze played a match for Arsenal against Barnet, he was brilliant in that game and was told to come back for pre-season training with an eye to signing him.
He was recommended to Crystal Palace by one of their English-based talent spotters Frederick Ajayi, who had extensively scouted him.
The precocious midfielder, who can also play as a winger and striker, has the ability to dribble past opponents with impeccable speed and elegance, possesses great vision and technical abilities and an immense work rate, hallmarks of an elite player.
Crystal Palace managed to bring Nwabueze for a trial and he was offered a deal after a series of test games.
Ifeanyi Emmanuel