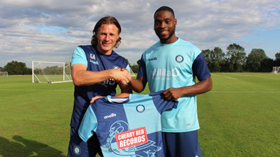 League One club Wycombe Wanderers have announced the signing of Lagos-born striker Fred Onyedinma from Millwall.
The 22-year-old has joined the Chairboys on a three-year deal after two previous loan spells at the club during the 2014-15 and 2018-19 seasons.
In the two periods Onyedinma was at Wycombe Wanderers, he appeared in 51 official matches and scored 12 goals.
Commenting on his new signing, manager Gareth Ainsworth said : ''We know exactly what we’re getting; a very exciting, pacy forward who can make things happen in the blink of an eye and contribute plenty of goals and assists.

''He’s a player with huge potential, and a great deal of credit goes to our chairman Trevor Stroud for getting the deal over the line and bringing Fred back to the club, where I know he’ll settle straight back in and be a popular member of the team in the changing room and on the terraces.''
Onyedinma, who is good pals with Super Eagles midfielder Alex Iwobi, will wear the number 23 jersey at Wycombe Wanderers in the new season.
Igho Kingsley
Photo Credit : wycombewanderers.co.uk