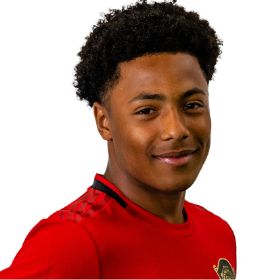 Through a statement on their official website, Premier League side Manchester United have confirmed the capture of Nigerian youngster Dillon Hoogewerf.
United announced that international clearance has now been received for the dual-eligible striker who played for Ajax Amsterdam last season.
The 16-year-old and the two new additions Johan Guadagno and Mateo Mejia will be first year scholars at Manchester United in the 2019-2020 campaign.
The paperwork was completed in time for Hoogewerf to be eligible to make his debut in a 3-0 victory against Sunderland in the U18 Premier League on Saturday.
A Netherlands U16 international, the attacker began his career at FC Almere, where he spent four years, before he was acquired by Ajax Amsterdam in 2012.
Hoogewerf as well as two other Nigeria-eligible players Shola Shoretire and Ayodeji Sotona will represent Manchester United U18s this season.
Ifeanyi Emmanuel
Photo Credit : manutd.com