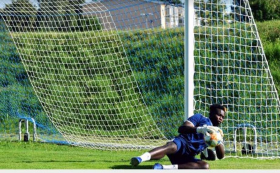 Allnigeriasoccer.com can exclusively report that former Nigeria U23 invitee Edward Ogbebor-Onaiwu could be heading to Cyprus in the January transfer window.
The teenage goalkeeper is currently unemployed following his departure from EFL League Two club Stevenage.
He spent time training at Brentford in September and October 2019 with a view to a transfer but there has been no positive feedback from the leadership of the Bees.
It is understood that Ogbebor-Onaiwu has been offered a contract by ENAD Polis Chrysochous FC who play in the Cypriot third-tier and Akritas Chlorakas, a second league club, have asked him to train with the club.
If he passes a medical at ENAD and signs on the dotted line, he won't be able to play for their first team until the transfer window opens for business.
The 19-year-old did a week of training with ENAD's first team before returning to England with his family.
Finikas Agias Marinas Chrysochous had offered him a contract, however, he turned it down as he wants to make the right move.
Ogbebor-Onaiwu counts Crystal Palace, Charlton Athletic and AFC Wimbledon as his previous clubs in England.
Ifeanyi Emmanuel