...the complete Nigerian football portal
Subscribe
'We Were Not Nervous In The Last Minute' - Awaziem Reacts As Leganes Boost Survival Hopes With Win
Published: December 08, 2019 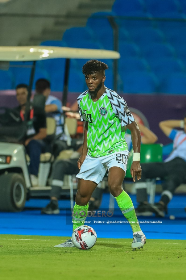 CD Leganes are no longer the bottom team in La Liga after a hard-fought 3-2 win against fellow relegation candidates Celta Vigo at the Estadio Municipal de Butarque on Sunday evening.
The Madrid-based side led 2-0 at the interval courtesy of Oscar Rodriguez's brace, then Kevin Rodrigues added a third on 57 minutes before Nestor Araujo and Iago Aspas scored in the 64th and 81st minutes to set up a nervy ending.
Chidozie Awaziem almost celebrated his first La Liga goal in the 11th minute but saw his header hit the crossbar.
Referee Jose Maria Sanchez Martinez consulted the VAR and did not award a penalty to Celta Vigo after a handball in the box by the Nigeria international defender in injury time.
Speaking to La Liga TV after the game, Awaziem was delighted with the win and has played down suggestions that the Leganes players were nervous in the last minute of the encounter.
''I want to say congratulations to the team, I feel so happy, the team deserve the three points today because we needed it and we came all out to win the game,'' said Awaziem.
''We were not nervous in the last minute, it is football and sometimes you are under pressure so I think we had pressure in the last minute but all the players know what to do, where to defend, and we defended very well till the last minute.''
The Super Eagles star admitted that they are feeling confident following today's win, ahead of their next league match against Deportivo Alavés on Friday, December 13.
''When you start to win games, you begin to get confident and you begin to develop the habit of winning and this is a good step to get out of the relegation zone,'' Awaziem concluded.
While Awaziem went the distance, Kenneth Omeruo watched proceedings from the bench for the entirety of the game.
Ifeanyi Emmanuel