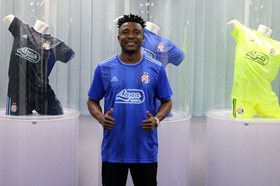 Former Nigeria U23 invitee Iyayi Believe Atiemwen was robbed of a big chance to showcase his skills for the scouts in attendance in their UEFA Champions League game against Manchester City yesterday.
The Dinamo Zagreb ace has scored four goals from 14 games in all tournaments this season, and played in yesterday's reverse fixture in Manchester back in October.

Croatian manager Nenad Bjelica did not include the 23-year-old in his match day squad to face the Citizens, and the versatile winger thus missed out on an opportunity to show off to the hosts of scouts that thronged the Stadion Maksimir.

Real Madrid, Barcelona, Juventus, Bayern Munich, AC Milan, Borussia Dortmund were just a few of the elite clubs that stationed their talent hunters to run the rule over the players in action, according to Croatian daily sports newspaper Sportske Novosti.

Gabriel Jesus struck a treble for Manchester City to go with Phil Foden's effort while Daniel Olmo scored the consolation for the hosts in the 4-1 loss that eliminated them from European football for this season.