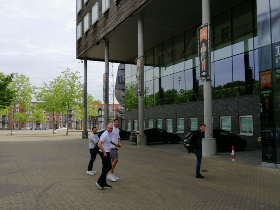 One-cap Nigeria international Maduka Okoye has arrived in Rotterdam for contract talks with six-time Dutch champions Sparta Rotterdam.
According to Voetbal Primeur, the Fortuna Düsseldorf goalkeeper and his agent, Fardy Bachdim were spotted at the Het Kasteel on Friday afternoon (see picture), and they were there for a conversation with technical manager Henk van Stee.
Okoye can begin to speak to other clubs even without the approval of Fortuna Düsseldorf because his contract with the German Bundesliga side expires at the end of next month.
Apart from Sparta Rotterdam, the dual-eligible goalkeeper is also attracting interest from unnamed European clubs.
Though nothing was agreed after the initial round of talks yesterday, Okoye recently hinted that he could be playing in the Netherlands next season.
Since 2017 he has been representing the youth teams of Fortuna Düsseldorf, having previously defended the colours of Borussia Mönchengladbach and Bayer 04 Leverkusen.
Sani Kaita and Dele Adeleye, who were part of the Super Eagles squad to the 2010 World Cup, have both turned out for Sparta Rotterdam in the past.
Ifeanyi Emmanuel
Photo Credit : Bennett van Fessem
Copyright ANS