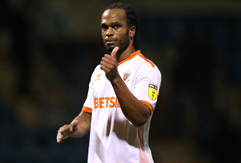 Blackpool have confirmed their retained and released list following the cancellation of the 2019-2020 season.
Among the players retained by The Seasiders is Nigeria-eligible striker Nathan Delfouneso, who is contracted to the club until the end of next season, with option for a further year.
Last season, Delfouneso was a key player for Blackpool, starting 26 of their matches in all competitions and came on as a substitute on nine occasions.
The 29-year-old was particularly impressive in the FA Cup, netting four goals in four games, and struck three times in the third-tier.
He returned for a fourth spell with Blackpool in 2017 and has now played 239 matches in total for the club, scoring 38 goals.
A former England U21 international, Delfouneso previously represented Aston Villa, Burnley, Leicester City, Coventry City, Blackburn Rovers, Bury and Swindon Town.
Igho Kingsley
Photo Credit : blackpoolfc.co.uk