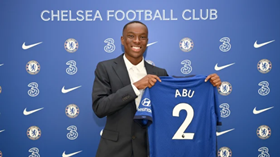 It is that time of the year when English Premier League clubs start announcing their new intake of academy scholars, and Chelsea are one of the first clubs to do so.
Allnigeriasoccer.com exclusively reported eight months ago that promising goalkeepers Kelechi Chibueze and Prince Adegoke as well as talented fullback Derick Abu have been offered scholarships for the 2020-2021 season, and Chelsea have confirmed as much, with the three teenagers among their academy scholars.
The three Nigerian youngsters pen to paper in a socially-distanced signing session at Cobham this week, Chelsea wrote on their official website.
Abu, who has been likened to Liverpool and England star Trent Alexander-Arnold, snubbed Norwich City before joining Chelsea at U11 level following a successful trial.
The 2003-born defender was included in Chelsea's matchday squad for their U18 Premier League Cup fixture with Wolverhampton Wanderers last October.
While Chibueze has been with Chelsea since the U8 age group, fellow goalkeeper Adegoke joined the club at U13 level.
The two goalkeepers made the bench for U18 Premier League matches while they were still schoolboys.
The 16-year-old Adegoke was officially invited to train with the Golden Eaglets ahead of the 2019 FIFA U17 World Cup but couldn't travel to Abuja due to club and educational commitments.
Abu, Adegoke and Chibueze have been promoted to Chelsea U18 squad for the 2020-2021 season.
Ifeanyi Emmanuel
Photo Credit : chelseafc.com
Copyright ANS