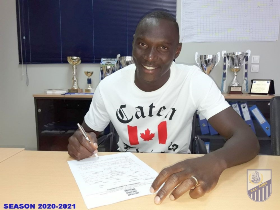 Former Flying Eagles defender Daniel Adejo has extended his contract with PAS Lamia, the Greek Super League club informed through their official website on Thursday, August 6.
The financial terms and duration of contract signed by the Nigerian have not been disclosed by the club based in Lamia.
Adejo joined PAS Lamia in July 2018 and has gone on to make 68 appearances in the Super League and Greek Cup.
The 30-year-old has registered five goals in two seasons - four in the Super League and the other in the Cup.
A key member of the Flying Eagles squad to the 2009 FIFA U20 World Cup, PAS Lamia are his third club in Greece, having previously worn the colours of Kalloni and Kerkyra.
He began his professional career with Italian club Reggina and has also had spells with Vicenza and Salernitana.
Igho Kingsley
Photo Credit : lamia1964.gr
Copyright ANS