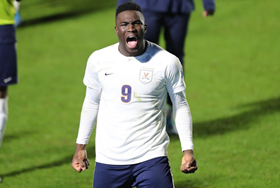 Daryl Dike, the younger brother of out-of-favour Super Eagles striker Bright Dike, has been voted Major League Soccer's Player of the Month for August 2020, informs the official website of MLS.
Last month, Daryl, who was selected number 5 overall in 2020 SuperDraft, recorded three goals and two assists in three matches for Orlando City.
The 20-year-old has totaled three goals and provided three assists in five appearances in the American top-flight this term and was in action for 353 minutes.
He netted his first career goal in Major League Soccer in a 3-2 loss to Inter Miami before grabbing the first brace of his career in a 3-1 win vs Nashville SC.
A product of University of Virginia, Daryl tallied 15 goals and nine assists through 36 appearances in his collegiate career.
While Courtney Dike is cap-tied to Nigeria having featured at the 2015 Women's World Cup, her brothers Bright and Daryl remain eligible to represent Nigeria and United States internationally.
MLS Player of the Month is voted upon by a panel of select national media members in a process conducted by MLS Communications.
Igho Kingsley
Photo Credit : orlandocitysc.com
Copyright ANS