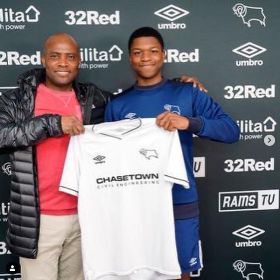 Allnigeriasoccer.com has been told that talented box-to-box midfielder Bayo Fapetu has agreed a pre-scholarship deal with Championship club Derby County.
On Friday, Fapetu took to social media, to announce that he has put pen to paper on a long-term contract with The Rams without revealing the length of the deal.
This website understands that he is still on schoolboy terms at Derby County but the deal will be upgraded to a scholarship as from July 1, 2021 and he will be among the new intake of academy scholars for the 2021-2022 season.
Born in London and eligible to represent the Nigerian and English youth teams, he is departing Arsenal after ten years, having joined the north London club in 2011.
Several unnamed top English Premier League clubs explored the possibility of signing the 16-year-old when it became clear that he was leaving the Gunners but he opted for Derby County because they presented a better opportunity in terms of breaking into the first team.
Derby County have a good youth set-up and represented England in the UEFA Youth League in the 2019-2020 campaign after beating an Arsenal side containing Bukayo Saka, Xavier Amaechi and James Olayinka to win the U18 national title in May 2019.
Ifeanyi Emmanuel
Copyright ANS