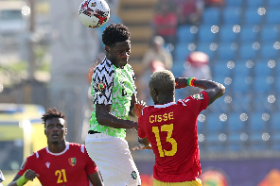 Italian Serie A club Torino are willing to listen to offers for Nigeria international Ola Aina.
According to Toro News,  Torino coach Ivan Jurić could sanction the sale of the Chelsea academy product in the summer transfer window.
Juric will run the rule over Aina in pre-season training if the versatile defender can fit into his plans before making a decision on the future of the Super Eagles star.
The former England U19 skipper has not worked with Juric before as the Croatian was recently appointed coach of the Maroons with effect from July 1, 2021.
Aina enjoyed a successful loan spell at Fulham last season even though the Cottagers were relegated, making 31 starts from a possible 38 in the Premier League.
On a personal level, he won the Premier League Goal of the Month award for November for his brilliant strike vs West Brom and also took home Fulham's Goal of the Season prize.
He was not in the long-term plans of former Torino coach Marco Giampaolo before heading out on loan to Fulham, who didn't take up the option to sign him on a permanent basis after losing their top-flight status.
Igho Kingsley
Copyright ANS