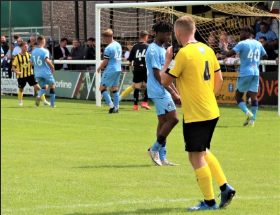 Allnigeriasoccer.com understands that Nigerian center-back Udoka Chima has improved his chances of earning himself a contract at Championship club Coventry City after a solid performance for the U23s in a pre-season game against National League North club Leamington FC on Saturday, July 10.
The friendly was originally meant to be a first-team fixture but the Sky Blues decided to send their U23 squad to Harbury Lane due to the fact the senior team was going abroad and had to quarantine.
Chima, who is also on the radar of Newcastle United and Sporting Braga this summer, was named in the starting lineup by Coventry City U23 manager Luke Tisdale.
Predominantly a right-footer, the 19-year-old had an excellent game despite being deployed as a left-sided center-back.
Coventry City fans were delighted with the performance of Chima and they praised him during and after the game.
In the friendly attended by more than one thousand fans, Coventry City defeated Leamington FC 3-1.
The Italian-born Udoka, whose last English club was Burnley, trained with Portuguese Primeira Liga giants Benfica in May 2021.
Ifeanyi Emmanuel
Photo Credit : leamingtonfc.co.uk
Copyright ANS