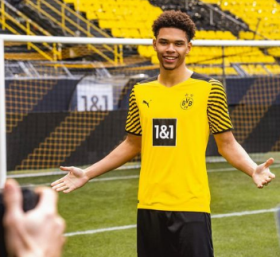 Borussia Dortmund's highly-rated central defender Nnamdi Collins faces a few weeks on the sidelines.
The Germany youth international of Nigerian descent suffered a knee injury during Borussia Dortmund's second pre-season friendly against VfL Bochum last week, leading to his substitution eighteen minutes into the second half.
With Dortmund coach Marco Rose still without some of his European Championship participants, Collins was promoted to first team training and was also given minutes in the team's opening pre-season friendly against FC Gießen.
The 17-year-old has been left out of Borussia Dortmund's training camp in Bad Ragaz after an MRI revealed that his injury is worse than first feared.
"He is to be out for a few weeks and can not go to the training camp," head of players’ department Sebastian Kehl said to Ruhr Nachrichten (subscription required).
The Black and Yellows are facing a crisis in the center of defence during pre-season, with Dan-Axel Zagadou, Soumaïla Coulibaly and Mats Hummels also injured.
Ifeanyi Emmanuel
Photo Credit : bvb.de
Copyright ANS