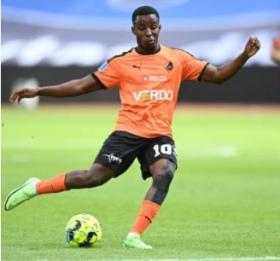 Manchester United academy product Tosin Kehinde has won the official Danish Superliga Goal of the Week for matchday three, the Danish Superliga informed via social media on Wednesday morning.
The Nigerian-born winger opened the scoring at Ceres Park as Randers registered an impressive 2-1 road win against Aarhus GF.
Twenty-seven minutes into the contest, Kehinde elegantly headed the ball over his opponent and then lifted it over an onrushing Jesper Hansen in the AGF goal.
It was his second goal involvement of the 2021-2022 season after bagging an assist in the opening day win at Vejle BK.
Being voted the Goal of the Week winner is the second recognition Kehinde has earned in the space of 24 hours as he was named to the Team of the Week on Tuesday, August 3.
In a 4-4-2 formation, the 2019 Nigeria U23 invitee was deployed as a right midfielder.
The Anglo-Nigerian could make his European debut when Randers tackle the winner of the showdown between Turkish club Galatasaray or Scottish team St. Johnstone in the Europa League playoffs on August 19.
Ifeanyi Emmanuel
Copyright ANS