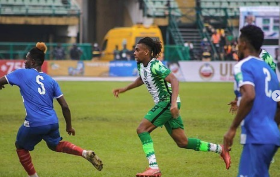 Nigeria defeated Liberia 2-0 at the Stade Ibn Batouta in Tangier on Saturday evening to set up a winner-take-all clash with nearest Group C challengers Cape Verde on the final day of the 2022 World Cup qualifiers.
In the other group game, the Blue Sharks came from behind to register a 2-1 win against Central African Republic, a victory that takes them to ten points, two less than the Super Eagles heading into the last round of matches.
Victor Osimhen and Ahmed Musa's penalty kicks were all the three-time African champions required to secure their fourth win in 2022 World Cup qualifying.

The Super Eagles  went ahead in the 14th minute when goalkeeper Boison Wynney De Souza clipped Kelechi Iheanacho and the referee had no hesitation in pointing to the spot. The spot kick was converted by Victor Osimhen.

The 'hosts' Liberia restricted the Super Eagles for much of the second half but a 90th minute penalty scored by Ahmed Musa who came off the bench ensured that the Lone Stars finished the contest empty handed.
Osimhen won a penalty after he was wrestled to the ground by the Liberia goalkeeper.
It will go down to the last batch of games in Group C and the Super Eagles have to avoid defeat at the Teslim Balogun Stadium on Tuesday, November 16 to advance to the playoff round.
Michael Arinze
Copyright ANS