UCL : Chukwueze impressive for Villarreal in draw versus Juventus 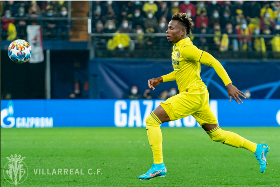 Samuel Chukwueze was in action for 90 minutes on Tuesday night for Villarreal in their round of 16 first leg fixture against Juventus at the Estadio de La Ceramica.
The match ended 1-1 with Dusan Vlahovic and Daniel Parejo scoring for Juventus and Villarreal respectively.

Unai Emery made seven changes from the side that beat Granada last time the Yellow Submarines played in the La Liga, with only Pau Torres, Parejo, Arnaut Danjuma and Giovani Lo Celso retaining their places.

Juventus went ahead just 32 seconds into the game as Arsenal target in the January transfer window Vlahovic scored on his Champions League debut for the Old Lady.

Villarreal gave the ball away after an initial build up from the back but that attacking move failed to work out as planned which allowed Vlahovic to receive the ball from a teammate and fire into the far corner with his weaker right foot.

Chukwueze created a goal scoring chance in the 16th minute when he spilled away from De Sciglio down the right before fizzing it into the middle for Danjuma.

The Dutch forward of Nigerian descent improvised with a delightful backheel towards the near post, but Szczesny got a strong hand to it.

Villarreal enjoyed good spell of possession towards the end of the first half with Chukwueze and Lo Celso linking up well. The wingers eventual cross was blocked by USA international Weston McKennie.

A sustained pressure from Villarreal in the second half eventually paid off with a goal when Daniel Parejo side footed home the ball as étienne Capoue delivered a cross into the Juve box with 66 minutes played.

Chukwueze was fouled in the 72nd minute by Adrien Rabiot as the Frenchman's high boot caught the winger's left knee.

The Diamond Academy of Umuahia Academy product was however lucky not to have suffered any damage from that challenge.
.
Chukwueze was replaced in the closing minutes by Yeremi Pino.