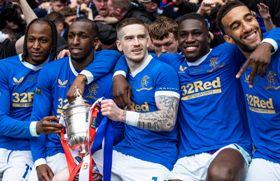 Super Eagles left-back Calvin Bassey has insisted that he expects to be at Rangers next season despite speculation linking him with multiple Premier League and Italian clubs this summer.

The Daily Record reported on Friday night that Aston sent a scout to Hampden Park to run the rule over the Nigerian during Saturday's Scottish Cup final against Hearts.

The Leicester City academy product is not having his head turned by reports linking him with clubs in the big five European Leagues and has pledged his loyalty to Rangers.

In quotes relayed by BBC Sport, via Premier Sports, Bassey said post-match after the win vs Hearts: "It's unbelievable. I think the boys have been excellent this season, worked so hard, to come back from the disappointment of Wednesday in extra-time, it shows the character of the players, we got our reward.

"I thank God and thank my team-mates. It's not a one man team. Without them I would not be where I am.

"I'm focused here. I'm getting ready to come back in pre-season fitter than I was last season."

Bassey still has two years to run on his current contract with Glasgow Rangers.