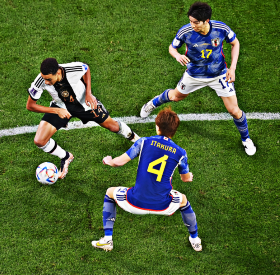 The substitutes made the difference for the Asian giants as Ritsu Doan passed the ball into an empty net in the 75th minute to cancel out Ilkay Gundogan's opener from the penalty spot in the first half, before former Arsenal man Takuma Asano fired in from pointblank range for the winning goal five minutes from time.

Musiala has been in brilliant form for Bayern Munich this season, scoring 12 goals and registering ten assists in all competitions, and he took that form with him to Qatar.

19y 270d - Aged 19 years and 270 days, Jamal #Musiala is the youngest German player to appear at a World Cup since Karl-Heinz Schnellinger in 1958 (19 years 72 days) - in total, only three German players have appeared at a younger age than Musiala. Stage. #GERJPN #FIFAWorldCup pic.twitter.com/2osAqZ4Bpv

Aged 19 years and 270 days today, Musiala is the youngest German player to appear at a World Cup since Karl-Heinz Schnellinger in 1958 (19 years 72 days).

In the 45th minute, the attacking midfielder had a chance to double Germany's advantage when he glided past Ko Itakura but his shot sailed over.

Five minutes into the second half, Musiala could have scored the goal of the tournament, showing amazing footwork to go past at least four Japanese players but his shot let him down as the ball sailed over the crossbar.

Ekoku, who was on commentary duties for the World Cup world feed, hailed the skillful Germany number 14 shortly after his missed chance.

"He (Musiala) has got great feet, this young boy. Glided past three, four opposing players. In the end Itakura goes to ground, expecting a shot which never came.

"And that's twice now he found himself in good positions, way over the crossbar."

Musiala has not scored for Germany since October 11, 2021 when he found the back of the net against North Macedonia.

He earned his 18th cap for Germany against Japan.