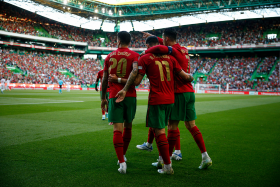 Portugal coach Fernando Santos is keeping his cards close to his chest regarding his team selection for Thursday's World Cup H opener against Ghana at Stadium 974, Doha.

It is all but confirmed that Real Madrid and Manchester United legend Cristiano Ronaldo will return to the starting lineup against the Black Stars after missing last week's friendly against Nigeria due to a stomach bug.

João Félix,  Bernardo Silva, André Silva and Bruno Fernandes occupied the attacking positions in Portugal's 4-0 rout of the Super Eagles and it is envisaged that one of them will make way for Ronaldo.

Ronaldo's second spell as a Manchester United player came to an end on Tuesday, with the striker leaving the Red Devils by mutual agreement after he attacked the club in an interview with Piers Morgan.

Asked at the pre-match press conference who Ronaldo will replace in the starting lineup after his side's impressive performance against Nigeria, Santos was quoted as saying by A Bola : "We had a very good performance in terms of joy, dynamism and organization, it was a very good 35 minutes, but then there were phases in which we disconnected and made mistakes.

"I know that if there were no mistakes in football it would always be 0-0, but there are unnecessary mistakes.

"If we don't commit them, we are closer to going through the other part of the postal code. The other question [who leaves to enter Ronaldo] tomorrow I answer."

South Korea and Uruguay are the other teams Ghana will face in Group H of the 2022 World Cup.