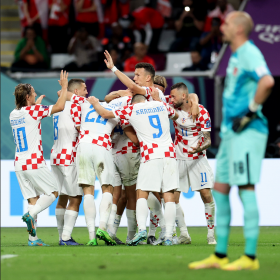 Tottenham Hotspur star Ivan Perisic was impeccable for Croatia in their impressive win over Canada at the 2022 FIFA World Cup.

Croatia got their first three points of the 2022 FIFA World Cup after defeating Les Rouges of Canada 4-1 in a Group F matchday two encounter played at the Khalifa International Stadium in Al Rayyan.

Canada wingback of Ghanaian descent, Alphonso Davies opened the scoring as early as the second minute but goals from Lovro Majer, Marko Livaja and a brace by Andrej Kramarić ensured a comeback victory.

Perisic was instrumental as he got two assists in the 86 minutes he was on the pitch.

15 - Ivan Perišić has been directly involved in 15 goals at World Cups and EUROs combined (9 goals, 6 assists), five more than any other Croatia player. Evergreen. pic.twitter.com/c61GNmYSkf

With his brace of assists, the winger has now been directly involved in 15 goals (9 goals, 6 assists) at the FIFA World Cup and the Euros, five more than any other Croatian footballer, according to OPTA.

Many Nigerians were impressed by his display and have taken to their Twitter handles to give the former Inter Milan wingback some accolades.

Here's how Nigerian fans reacted to Perisic's performance against Canada :

Perisic should be MOTM to be honest

You know you finished when Perisic is running stepovers on you

Croatia na their mate? That midfield and perisic alone is so technically ahead of the whole Canadian squad

I fear you if you no fear Perisic

Kramaric scored the leveller, Perisic with the cheeky assist.