World Cup 2022 : Ex-Super Eagles star reveals how Morocco must approach round of 16 game 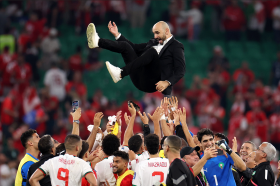 Former Nigeria international Julius Aghahowa  has tasked Morocco's Atlas Lions to take each game one step at a time after they finished as Group F leaders in the 2022 FIFA World Cup.

Morocco topped the group with 7 points after defeating Canada 2-1 Thursday evening to finish ahead of Croatia that held Belgium to a goalless draw.

The Super Eagles forward was a guest analyst on Brila FM Lagos for the coverage of the matches that simultaneously kicked off at 4p.m.

"The performances of the African teams at the World Cup has shown that our game on the continent has improved," Aghahowa noted after the matches.

"Powerhouses like Nigeria, Egypt, Algeria, South Africa did not qualify yet those who qualified are doing us proud

"As for Morocco, I feel that they should take each game one step at a time. It will ne a very difficult game for them in the round of 16.

"We do not know yet which country they will face but they need to be calm, don't panic," the former Shakhtar Donetsk of Ukraine and Wigan Athletic of England forward said.

On the future of Belgium head coach Roberto Martinez, Aghahowa believes his job is on the line despite the heights he has taken the team to in recent years.

The Golden generation of Belgium football reached the semifinals stage and placed third in the 2018 FIFA World Cup in Russia.

They are also the second best ranked team according to the October FIFA World ranking.

"Most federations in Europe do not want to upset things in their national teams but it will be surprising if Roberto Martinez is not relived of his job with these group exit.

Morocco will play the second placed team in Group E.