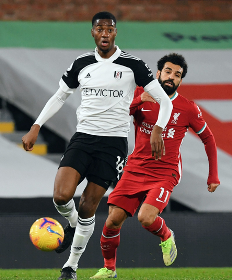 Tosin Adarabioyo was a non-playing substitute for Fulham as they suffered a 1-0 defeat at the hands of Tottenham Hotspur in a Premier League clash at Craven Cottage on Monday night.

The Manchester City academy product has struggled for playing time since October having made three starts from a possible twelve in the Premier League.

Although Fulham  activated the option in Tosin's contract earlier this month, he has been linked with a departure from the Cottagers in recent days.

Italian transfer market expert Fabrizio Romano has claimed that the Anglo-Nigerian has chances to leave Fulham during the January transfer window, adding that several top European clubs including Monaco are monitoring the situation of the center back.

Several top European clubs, including Monaco, are monitoring highly rated centre-back who’s said to be ready for the next step in his career. pic.twitter.com/AB5gfD3Lby

Tosin remained rooted to the bench as Issa Diop and Tim Ream were paired in central defence for the entirety of the London derby against Tottenham Hotspur.

Two minutes into first half stoppage time, Kane hit a curler into the bottom corner to hand Tottenham Hotspur all three points and their first Premier League double of the season.

Fulham pushed and shoved as they searched for an equalizer but Spurs defended very well and held on to victory.

Spurs' win over Fulham took them to within three points of the Champions League places having played a game more than Manchester United and Newcastle United.