Subscribe
ODION IGHALO: I Want To Stay With Granada
Published: May 14, 2012 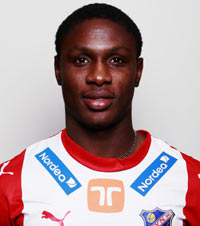 Granada survived the drop despite losing 0-1 to Rayo Vallecano in the last round of matches played in Spain.

After Sunday's game, Nigeria youth-teamer Odion Ighalo was a happy man even though he did not take his tally of goals to more than six.

''I want to thank God for everything, is very important for us to stay in First Division. We lost the game but we got the stay, which is what matters,'' Ighalo told reporters.

Primarily an Udinese player, the 22-year-old could be returning to Italy if his loan deal which expires this summer is not renewed.

''It's like my second home, I want to stay (with Granada, ed) for sure. I'll speak with the president to see what happens,'' Ighalo said.