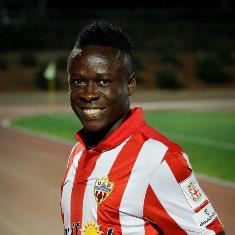 ''I am happy with this goal and the victory. Before the end of the Segunda B, I have set for myself a personal target of 12 goals.

''With the way the team is playing, I am confident we can finish amongst the top two teams at the end of the season,'' Okoro told allnigeriasoccer.com.

Note that Stanley Okoro was dismissed in the second half for trying to con the match referee into awarding a penalty.

Ramon Azeez, whose name had been bandied in the local media as a possibility for the warm up game against Venezuela, was also on target in the 63rd minute  for the Francisco Rodriguez led side.