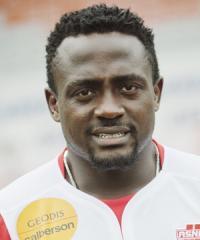 Simon Zenke was on song for Sanliurfaspor in a Turkish PTT 1. Lig clash against Giresunspor on Saturday.

The former Flying Eagles striker struck in the first half as his club were forced to a 1-1 draw by the visiting team at the Sanliurfa GAP Stadi Arena.

It was his 3rd league goal in six appearances for the Ceylanlar.

Zenke found the net in the 6th minute, giving the hosts the lead after being played in by his team-mate.

Three minutes into the second half, Alican Karadag, popped up with an equaliser for Giresunspor, who paraded ex-youth international Solomon Abwo.

Sanliurfaspor have 23 points points from 14 matches, while Giresunspor have 17 points from the same number of games.

In the winter transfer market, Zenke joined  Sanliurfaspor as a free agent after he mutually terminated his contract with Istanbul BB where he scored twice in nineteen appearances.