...the complete Nigerian football portal
Subscribe
Angelo Ogbonna Out For Minimum Of One Week
Published: September 17, 2015 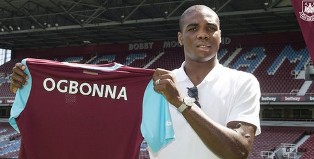 Angelo Ogbonna will spend a minimum of one week on the sidelines due to a hamstring complaint and is therefore ruled out of the Premier League tie against Manchester City on Saturday.

The Italy international sustained the injury during the first half of The Hammers 2 - 0 win over Newcastle United on Monday night.

And coach Slaven Bilic told reporters on Thursday afternoon that the defender is going to be away for a week or two, meaning he  will certainly miss the clash with City while he is doubtful for games against Leicester City and Norwich City.

Angelo Ogbonna has made his starting line - up five times this season, picking up one booking against Arsenal on match day two.

The 27 - year - old appended his signature to a four - year deal with West Ham in July.