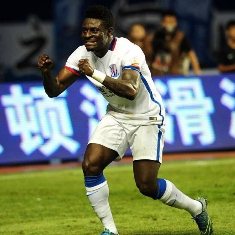 Finance Football has published a list of the top 20 highest paid players in the Chinese Super League for 2017, with one Nigeria international included.

Shanghai Shenhua marquee signing Carloz Tevez ranked first with a pay packet of 37.5 million euros a year. He is also the highest paid player in the world.

Brazilian midfielder Oscar is second with an annual salary of 24.4 million euros, followed by Shanghai SIPG teammate Hulk who pockets €20 million per season.

However, allnigeriasoccer.com understands that the ex-Inter Milan and Newcastle United star earned that amount in the 2016 season, and has agreed fresh terms that will see him pocket €8.5 million this year.

Though John Obi Mikel was not mentioned, he is guaranteed approximately €8.5 million in his first season with Tianjin Teda.