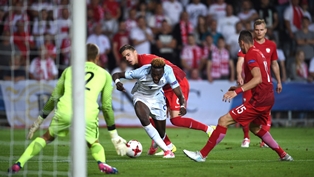 England have qualified for the semifinals of the European U21 Championship following their 3-0 hammering of hosts Poland at the Kolporter Arena, Kielce on Thursday night.

Goals from Gray, Murphy and Baker secured a comprehensive win for the Young Lions who finished top of Group A.

For the first time in the tournament, Chelsea striker of Nigerian descent Tammy Abraham started on the bench, but was introduced in the 72nd minute and added dimension to the Young Lions' game.

In the 82nd minute, Abraham won a penalty after he was fouled by Bednarek, and Baker scored from the spot to give Aidy Boothroyd's team a three-goal advantage.

In the other group game, Sunderland wonderkid Joel Asoro made his debut for Sweden in the U21 EURO after he entered into the fray in the 72nd minute versus Slovakia.

The Scandinavians were beaten 3-0 and crashed out of the tourney.