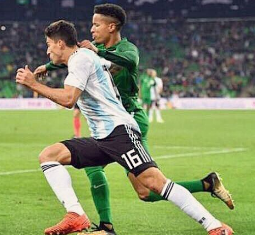 It is all but confirmed that Nigeria international Tyronne Ebuehi will depart Dutch Eredivisie outfit ADO Den Haag in the summer transfer window, with Benfica nailed on favorites for his signature, allnigeriasoccer.com understands.

Ebuehi penned a preliminary contract with Benfica in January, which will become activated on July 1 after his contract with ADO Den Haag has expired and the transfer window is open for business.

Everything is pointing to the fact that Super Eagles manager Gernot Rohr will include the Netherlands born talent among the 23 players he is taking to the 2018 World Cup.

Though Ebuehi will not be registered as a player of Benfica at the start of the football festival in Russia, the Portuguese setup will still be compensated by Fifa.

Starting from June 1, 2018, when the players included in the squad list must report to the training camp, Fifa will pay $8,530 per player per day (equivalent of N3,070,800.00) until they are knocked out of the competition whether or not they participated in the group games.

For the group stage alone, which ends with the Super Eagles facing Argentina on June 26, football's governing body will pay $221,780 (N79,840, 800.00) for each player named in the Nigerian roster, and the sum would increase if Nigeria advance to the last sixteen.

While ADO Den Haag will be allocated two-thirds of the amount, approximately N53.2 million, Benfica will receive N26.6 million (one-third of the amount) from Fifa even without Ebuehi kicking a ball for the club.

The 22-year-old has penned a five-year contract with Benfica.