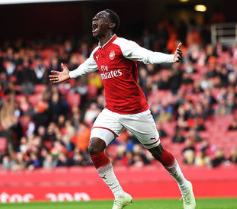 Arsenal wonderkid Folarin Balogun took his tally for the season to 21 goals in all competitions after scoring in  a 3-0 win against Chelsea in the U18 Premier League on Friday afternoon.
The England U18 international of Nigerian parentage was named in the starting line-up for the game staged at London Colney, goalkeeper Arthur Okonwo was a non-playing substitute along with Chelsea fullback Jordan Aina.
On 25 minutes, Balogun was on hand to put away the rebound after his initial effort was saved by goalkeeper Nicolas Tie.
Sam Greenwood put the game out of sight when he struck in the 58th minute after he was set up by Balogun.
Balogun played his third game in six days against Chelsea, having lasted 62 minutes against Norwich City U18s on March 2, played 45 minutes against Swansea City U23s on Monday and then racked up 81 minutes today.
The 17-year-old has scored in every competition this season : 17 goals in the U18 Premier League, 2 FA Youth Cup goals, 1 goal each in the U18 Premier League Cup and Premier League 2.
The young Gunners are four points ahead of closest challengers Tottenham Hotspur in the updated U18 Premier League standings.
Ifeanyi Emmanuel
Photo Credit : arsenal.com