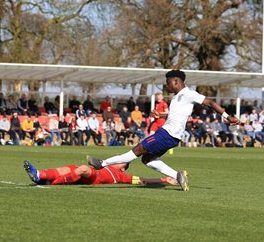 Nigeria-eligible winger Bukayo Saka put in an eye-popping performance for England U-19s with a brace in their 4-1 win against Czech Republic in a European U19s Championship qualifier on Wednesday afternoon.

The Arsenal starlet was handed a starting berth by manager Keith Downing at St George's Park while his compatriot, Manchester City's midfielder, Felix Nmecha was afforded a place amongst the substitutes.

Donning the No. 11 shirt, Saka did really well to pull his team level after Jakub Selnar had put the opposition in front, profiting from a pass from Angel Gomes to prod home.

He grabbed his brace in the 56th minute, Gomes again the provider with a similar move to the first goal.

Nmecha came on for Gomes in the 72nd minute to taste match action.


The victory put the young Three Lions in a commanding position as they bid to top a group which includes Greece and Denmark and secure a place at this summer's finals slated for Armenia.
Emmanuel Chinaza
Photo Credit : arsenal.com