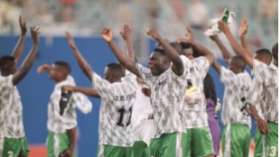 Super Eagles legend Sunday Oliseh has revealed that he told Gianfranco Zola that England have not won a major tournament for more than five decades.
The former Juventus, Borussia Dortmund and Ajax Amsterdam midfielder studied for his coaching badges in England alongside Manchester United legends Ryan Giggs and Ole Gunnar Solskjær and they kept talking about the strengths of the Three Lions.
Oliseh was a key member of the Nigeria squad that won the 1994 Africa Cup of Nations and the football event of the 1996 Olympic Games in United States.
''For three years I was going in and out of London to get my coaching license and I spent a lot of classes with people like Ryan Giggs and all of them, even Ole Solskjær we graduated together,'' Oliseh said at the recent NFF Awards held in Lagos.

''And they were always talking about England national team. Then one day I was sitting with Gianfranco Zola and I told him the last time England won something I was not born yet.''
Oliseh continued : ''1993, we qualified for the Africa Nations Cup, 1993 we qualified for Nigeria's first World Cup. 1994 April 10th, won the African Nations Cup. 1995 won the Afro-Asian Cup.

''Six of the players from the group were members of the team that won the Olympics : Jay-Jay Okocha, Victor Ikpeba, Emmanuel Amuneke, Daniel Amokachi, Oliseh and Okechukwu''.
Ifeanyi Emmanuel
Photo Credit : fifa.com