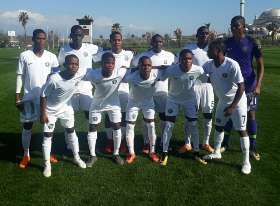 Golden Eaglets head coach, Manu Garba has announced his starting line-up for Sunday afternoon's Africa U17 Cup of Nations opening match against Tanzania at the National Stadium, Dar es Salaam.
Suleman Shaibu has held off the challenge of Bournemouth U16 star Joseph Oluwabusola and starts in goal for the five-time world champions.
There is no full debut for the much talked about Chelsea youth-teamer Adrian Akande, who would have become provisionally cap-tied to Nigeria if he made the starting XI.

Nigeria's goalscoring burden has fallen on the shoulders of Olakunle Olusegun, who was top scorer of the zonal qualifiers with four goals.