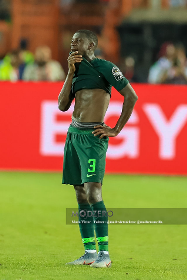 Super Eagles manager Gernot Rohr has offered the highest possible praise for Paderborn 07 left-back Jamilu Collins, saying he is a 'very important' member of the senior national team and likened him to a German player due to the hard work he puts in in training.
At the recently concluded Africa Cup of Nations, Collins had to wait until the quarterfinal before making his debut in the competition after suffering an injury in the final training session before the opener against Burundi,
With Elderson Echiejile finding himself clubless after the 2018 World Cup, Brian Idowu struggling to get games at Lokomotiv Moscow and Tyronne Ebuehi suffering a long-term injury, Collins was handed his maiden Nigeria call-up for an Africa Cup of Nations qualifier against Seychelles in September last year.
Asked how important Collins is to the Super Eagles, Rohr told Sport1 : ''Very important. This is a player who is offensively and defensively very strong. His left foot is very valuable to us - in a team where there are hardly any left-footers.
''I followed all the great games with Paderborn and I was very happy for him and his colleagues for the promotion.
''Collins is a player with a German mentality: He is a tough, serious worker who also does extra sessions on days off and after practice. That is good for all of Africa. ''
Rohr added : Collins had suffered a slight muscle injury in the final session before his first game against Burundi and had to rest for a few days.
''But then he needed to get back into the team. Although it is difficult to change a successful team. I did it anyway and he honored it with his very good playing style. I am glad that he is with us.''
Two years ago, Collins was playing in the third tier of German football but is in line to make his Bundesliga debut next month which is a testament to the giant strides he has made in his career.
Ifeanyi Emmanuel