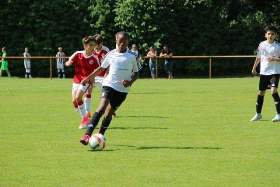 KFC Uerdingen 05 teen sensation Bright Osemudiamen Kelly has confirmed that he has committed his international future to Nigeria over his country of birth Spain.
The skillful winger, who has drawn comparisons to Villarreal's Samuel Chukwueze, has earned rave reviews from Nigerians based in Germany, who have monitored him at close quarters.
Born October 2005, Kelly started his footballing career at CD Yuncos Football Academy, before moving to Getafe and has also represented the youth team of Fortuna Dusseldorf.
''I want to play for Nigeria because it's the country my parents come from, I want to make my parents proud,'' Kelly told allnigeriasoccer.com.
''I have been watching the Super Eagles play and the two players I like in the team are Samuel Chukwueze and Alex Iwobi, I'd say I play more like Chukwueze than Iwobi.''
When asked what he hopes to accomplish in the next seven years, he replied : ''I want to play in the highest league in the world and play for Nigeria's senior national team.
''My dream club is FC Barcelona because they play a style that suits me. They pass well and create chances for the players to have an easy way to goal.''
Last season, Bright Osemudiamen Kelly scored 17 goals in 23 league matches for the youth team of KFC Uerdingen 05.
Ifeanyi Emmanuel