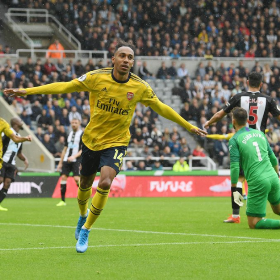 Arsenal made six major signings in the summer transfer window but it was a player on the books of the club last season who secured three points for the North London club in their season opener against Newcastle United on Sunday afternoon.
Pierre-Emerick Aubameyang scored what proved to be the game-winning goal in the 58th minute at St. James' Park after gathering Maitland-Niles' cross from the right before producing a calm finish to beat goalkeeper Dúbravka.
Speaking as a pundit on SuperSport, former Everton defender Joseph Yobo called the Gabon striker a world class player and added that Arsenal are guaranteed goals with Aubameyang in the team.
''He intercepted the ball, very perfect cross, that's a goal for Aubameyang, he is a top, world-class player,'' Yobo said.

''He has proven himself last season with the amount of goals that he scored. The first touch was good but to dink the ball over the goalkeeper, that is a special talent, that is something very skillful that he had to do if not there was no chance.

''He is someone that will always score goals for Arsenal, Arsenal need him.''
Since Aubameyang made his Premier League debut in February 2018, only Mohamed Salah (36) has scored more goals in the competition than the Gabonese star who has 33 goals to his name.
Ifeanyi Emmanuel
Photo Credit : arsenal.com