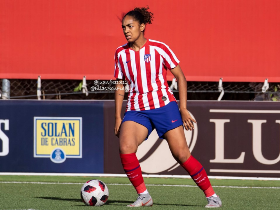 Atlético de Madrid have announced through their official website the signing of Nigeria-eligible striker Mabel Okoye from CD Tacon.
The 18-year-old will start her career at Atlético de Madrid with their Femenino B and will be hoping to break into the first team as the season progresses.
Okoye has been training with Atlético de Madrid Femenino B under the guidance of manager Blas Ramírez since August 1 and could make her competitive debut against CF Pozuelo de Alarcón on September 8.
In December 2018, the highly-rated teenager wrote her name in the history books after becoming the first player of Nigerian descent to win the U17 Women's World Cup.
A product of Madrid CFF, Okoye was a member of the Spanish side that won the UEFA Women's Under-17 Euro 2018.
She made her debut in the Spanish top flight, Primera División Femenina at the age of sixteen.
Ifeanyi Emmanuel
Photo Credit : ellassonfutbol.com