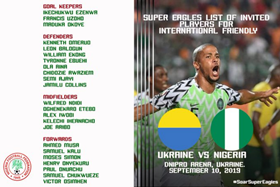 The Nigeria Football Federation incorrectly displayed the Ukrainian flag as they announced the Super Eagles squad list for the upcoming friendly against Ukraine.
The Nigerian Federation mixed up the yellow and blue colours, displaying them in the wrong order.
The flag of Ukraine is a banner of two equally sized horizontal bands of blue and yellow and it was originally adopted in 1848 but outlawed when the country was part of the Soviet Union.
The friendly between Ukraine and Nigeria is the first ever international match between the two countries senior national teams and will hold at the Dnipro Arena on September 10.
While the Nigerian Federation have called up 23 players for the friendly, Ukraine have not yet named their squad for the 2020 European Championship qualifier against Lithuania and the friendly against the Super Eagles.
Glasgow Rangers midfielder Joe Aribo and Fortuna Düsseldorf youth-teamer Maduka Okoye have received their maiden international call-ups.
Ifeanyi Emmanuel