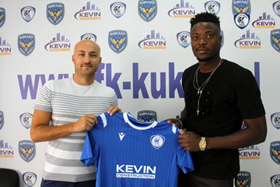 Albanian Superliga side FK Kukesi have confirmed via their official website  the signing of former Nigeria U23 skipper Erhun Obanor.
The central defender has joined FK Kukesi after a stint at Croatian club Rudeš, and has inked a one-year contract keeping him at the club until the end of the 2019-2020 season.
The Verilindoret competed in this season's Europa League but were knocked out in the qualifying round after losing to a Debrecen side containing Nigerian striker Haruna Garba.
A product of BJ Foundation which produced the likes of Isaac Success and Mikel Agu, Obanor began his career in Europe with German club SpVgg Greuther Fürth.
The 23-year-old played for COD United, Bendel Insurance, Abia Warriors and Mountain of Fire before moving abroad in search of the proverbial golden fleece.
Last season, Obanor appeared in 23 league matches for Rudes in the Croatian top division.
Ifeanyi Emmanuel
Photo Credit : fk-kukesi.al