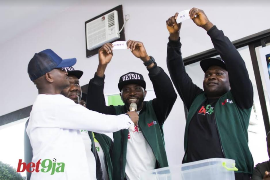 All is now set for the commencement of the 2019 Bet9ja Abia State Super League as 64 teams take to pitch for Football honours.

Aba Warriors and Okpulu FC will set the ball rolling in the Aba zone with the tournament's kick off on Tuesday November 12, 2019 starting from 10am at Etche Road Football Pitch.

Insiders FC will follow it up at the same venue with a game against St Philips FC starting from 1pm, while three more matches will also take place same day in the Zone.

Ohafia Zone with four teams on the books will have Abam Youth FC going head to head with Bulldog Academy, just as Samba Boys lock horns with Amaeke Abam FC at the Police Barracks.

At the Umuahia zone, events will begin to unfold on November 20, 2019 with Ijere FC and Travelers FC taking centre stage at 2pm at the Umuawa Primary School Field, while Future Stars will battle Tiger FC at the same venue by 4pm.

According to the Chairman Local Organising committee, Engineer Kelechi Nnorom Orji, "We have put measures in place for a successful grassroots Tournament considering the fact that the grassroots and the schools should be the soul of every serious minded Football nation, we urge everyone to come out and support this cause''.