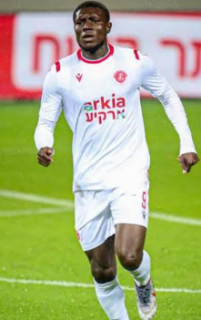 Nigerian striker Michael Olaha helped Hapoel Tel Aviv to register a win on his Israeli Premier League debut on Sunday, January 12.
Hapoel Tel Aviv completed the signing of the 23-year-old on January 7 and few days later, he was handed his competitive debut by manager Nir Klinger as Hapoel Tel Aviv beat Beitar Jerusalem 2-1 at the Bloomfield Stadium.
The deal taking Olaha to Hapoel Tel Aviv was brokered by Johnny Ogbah and the respected English-based Nigerian intermediary has explained why his client chose The Red Demons over other clubs interested in his services.
"Olaha signed a pre-contract with Hapoel Tel Aviv in June before joining them this January, '' said Ogbah to allnigeriasoccer.com.
"He chose Hapoel Tel Aviv because of the desire to take his career to the next level professionally. He proved himself in Vietnam.
"By God's grace he will prove himself in Israel and get the attention of national team selectors".
A product of Nigeria Professional Football League club Abia Warriors, Olaha was with Song Lam Nghe An FC for two years and departed the Vietnamese club after netting 18 goals in 76 league matches.
For the remainder of the 2019-2020 season, he will wear the number nine kit.
Ifeanyi Emmanuel