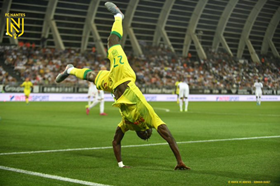 Nigeria international Moses Simon is close to landing a new deal with Nantes after his latest goal in a Coupe de France tie against Olympique Lyon on Saturday.
The winger's 87th minute effort at the Stade de la Beaujoire saw him take his tally for the season to six goals.
As previously reported by allnigeriasoccer.com via Eldesmarque, the five million euros purchase option inserted into the deal taking Simon from Levante to Nantes last summer will be automatically activated in case Simon scores 10 goals across all competitions or plays 25 matches.
The former Gent star needs four more goals or has to play three more matches for the obligation to buy him outright to be triggered.
Of the 22 matches Moses has participated in for Nantes, 20 were as a starter, including 17 games in the French top-flight.
He joined Levante on a permanent deal in August 2018, signing a multi-year contract until the end of the 2022-2023 season.
Ifeanyi Emmanuel
Photo Credit : fcnantes.com