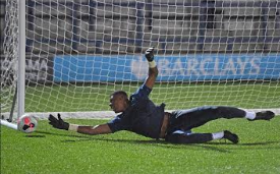 Tony Adegoke, the father of Chelsea goalkeeper Prince Adegoke, has explained why his son agreed to stay at Stamford Bridge beyond the end of this season despite attracting interest from other Premier League clubs.
Three Premier League clubs namely Arsenal, Wolverhampton Wanderers and Bournemouth were battling to sign the Nigeria U17 invitee before he was offered a scholarship by Chelsea.
The Blues youth team coaches are preparing Adegoke for the next level ahead of the 2020-2021 campaign as he often trains with the U18 team though he is classed as an U16 player.
"Prince agreed to remain with Chelsea because he has been with the club for quite a while, his future lies with Chelsea,'' said Tony Adegoke to allnigeriasoccer.com.
"He has signed a pre-scholarship contract with Chelsea. He has to be 17 before he can sign a professional contract."
Prince Adegoke comes from a goalkeeping family as his father was a goalkeeper for Victory High School Lagos in his younger days, and he would have learned some goalkeeping skills from his dad.
"Prince does not imitate any goalkeeper, he is just himself and tries to get things right.
"I was a goalkeeper during my youth. I used to train with Nigerian Breweries, I was the goalkeeper for Victory High School in Lagos,'' Adegoke Snr concluded.
Prince Adegoke is in contention to make his competitive debut for Chelsea U18s when they take on Newcastle United in the Premier League Cup this afternoon, having traveled with the squad to Little Benton.
Ifeanyi Emmanuel