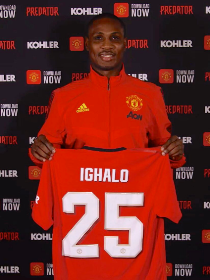 Manchester United coach Ole Gunnar Solskjaer has given three conditions required for Odion Ighalo to earn a permanent transfer to the Old Trafford outfit in the summer.
As first reported by allnigeriasoccer.com on transfer deadline day, the deal taking the Shanghai Greenland Shenhua striker to The Reds does not include an obligation or option to buy at the end of the 2019-2020 season.
The Norwegian football tactician has stated that United are willing to acquire the 2019 Africa Cup of Nations top scorer on a permanent basis provided that he impresses as a player and person, and helps the squad improve.
Manchester United's official website quoted Solskjaer as saying : "It's a loan, but when you're in the door and if you impress it gives you a chance.

"That's exactly the same for everyone who signs if it's permanent or it's a loan.

"If you impress as a player, if you impress as a person, if you can help this group improve, then of course there's a chance that we'll look at extending things."
Solskjaer is backing Manchester United fan Ighalo to be a success at The Reds having showcased his goal-scoring credentials for club and country in the past.
"That doesn't just go for Odion, but since you asked, yes, of course his incentive is to play as well as he can. And it's up to us to make sure that he'd want to stay if we wanted him.

"I think he's probably pinching himself at times, because he's now at his favourite club at the age of 30.

"Hopefully he'll prove to you what I think he will. He's a proven goalscorer, so he'll do all right,'' he concluded.
Having trained with the squad on Sunday, the 30-year-old Ighalo is in contention to become the first Nigerian player in history to play for Manchester United in the Premier League when they face Chelsea tonight.
Ifeanyi Emmanuel
Photo Credit : manutd.com