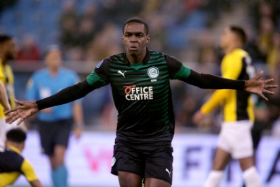 With a statement on their official website, Dutch club FC Groningen have informed that they will not be taking up the option to sign Joel Asoro on a permanent deal.
Asoro was loaned out by Swansea City for the entirety of the 2019-2020 campaign, with a purchase option included in the deal, but he has returned to the Welsh club, to whom he is contracted until June 30, 2022.
Born in Stockholm, Sweden, Asoro is the youngest player of Nigerian descent to debut in the English Premier League, aged 17 years and 117 days, when he came on in the 81st minute of Sunderland's 2-1 loss to Middlesbrough on August 21, 2016.
Explaining why FC Groningen have chosen not to buy Asoro, Technical Director Mark-Jan Fledderus told the club's official website : "Joel has shown several times last season that he has specific qualities and remains an interesting player.

"However, we now have to decide whether we want to exercise the purchase option and have made the choice not to.

"We wanted to loan him for an extra year, but that was not an option at the moment.
"We would like to thank Joel very much for the contribution he made in the past season and wish him every success in his further career."
The 21-year-old Asoro made 17 appearances for FC Groningen in all competitions, scoring three goals while providing two assists.
Ifeanyi Emmanuel
Photo Credit : fcgroningen.nl
Copyright ANS