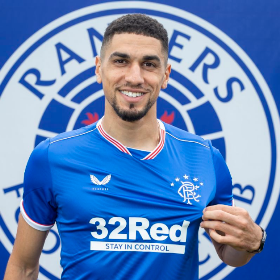 Liverpool legend Steven Gerrard has handed a debut to his new signing Leon Balogun in their Scottish Premiership opener against Aberdeen on Saturday afternoon, allnigeriasoccer.com reports.
Barring an injury in the warm-up, the former Brighton & Hove and Wigan Athletic central defender will step out on to the Pittodrie Stadium turf, beginning from 1230 hours, with the number 26 on the back of his jersey.
Signed as a free agent last month, Balogun only started training with the rest of his teammates at the Light Blues five days ago but he arrived at the club in tip-top condition as he was active for the Latics in the protracted 2019-2020 season.

The Super Eagle is partnered in central defence by another ex-Seagulls player in Connor Goldson.
Meanwhile, Joe Aribo, Rangers' Young Player of the Year, is set to play his 49th game for the club he joined last summer, having made the starting lineup.
New signing from Leicester City, Calvin Bassey is in line to make his professional debut aged 20 as he has been named among the nine substitutes.
Rangers finished second behind bitter rivals Celtic in the 2019-2020 campaign and will temporarily go top of the table if they win the early kickoff.
Igho Kingsley
Photo Credit : rangers.co.uk
Copyright ANS