...the complete Nigerian football portal
Subscribe
Eagles Coach Rohr Reveals The One Player That Impressed Him Most In Bayern's Win Vs PSG
Published: August 24, 2020 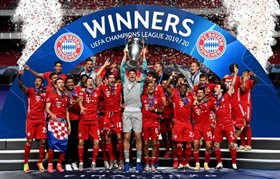 Nigeria manager Gernot Rohr has picked Bayern Munich goalkeeper Manuel Neuer as the player that impressed him the most in Bayern Munich's 1-0 win against PSG in the Champions League showpiece on Sunday night.
In truth, Neuer was the most outstanding player on the pitch and he made a number of key saves to prevent Neymar and Mbappe from scoring.
Rohr, who turned out for Bayern Munich from 1972 to 1974, believes that the German giants deserved to win their sixth Champions League title.
"It was a good game, a suspenseful final with two teams that were technically at the top level. With a Bayern which, true to its philosophy, had the ball, the possession and the chances. And managed, thanks to his goalkeeper, to keep a clean sheet.," Rohr said to France Bleu.
"The best team won. Paris Saint Germain tried to the end and weren't ridiculous at all. Obviously I'm happy, as a former Bayern player, to see that my friend Hans-Dieter Flick was rewarded and was able to lift the cup. I think it is well deserved.

"It is an exceptionally structured club, led by former great players and still able to honor the old ones. I think it's a club that has an exemplary philosophy."

Rohr went on to reveal that Bayern Munich controlled the game statistically and the best individual performance was from Neuer.
"In the second half there was a physical but also technical and tactical stranglehold on the side of Bayern who mastered their . More than 62% possession, more shots on goal, more attacks.
"These statistics prove that it is the best team which won even if with its individualities, Paris could have scored a goal.
"But the best individuality was Manuel Neuer, the Bayern goalkeeper, who stopped everything."
Neuer went the distance in every single game played by Bayern Munich in the 2019-2020 Champions League, 11 in total, keeping six clean sheets while conceding eight goals.
Igho Kingsley
Photo Credit : fcbayern.com
Copyright ANS